Starting with the 2017 Cabernet Sauvignon (92% Cabernet Sauvignon and the rest Cabernet Franc), it has a vibrant purple color as well as a great nose of red, blue, and black fruits intermixed with lots of spice, spring flowers, chocolate, and forest floor. It’s not a blockbuster, but it’s just seamless, gorgeously textured, and a stunning value.     January 31, 2020   www.jebdunnuck.com

One of the finest wines I was able to taste from this up and coming vineyard outside of Yountville, the 2016 Cabernet Sauvignon Sleeping Lady is all Clone 7 Cabernet Sauvignon (there’s a splash of Cabernet Franc in there as well) aged 22 months in barrel. A majestic, seamless wine, with tons of liquid violets, lead pencil shavings, rocky minerality, and crème de cassis, it hits the palate with awesome purity of fruit, sweet tannins, and a finish that leaves you looking for another glass. Despite its purity of fruit and balance, it has enough tannins to warrant 2-4 years or bottle age and will keep for 20+ years.”      January 31, 2019   www.jebdunnuck.com

Made to be fresh, fruity and enjoyed frequently, this wine is oily in lemon and apricot, with a refreshing, spritzy acidity that’s both bright and complex. The vineyard is one of very few in the state to grow the variety and this producer has made it its mission to honor both the site and the grape. She does.

The utterly profound 2015 Cabernet Sauvignon Sleeping Lady Vineyard comes from a site of alluvial soils just south of Dominus. This killer wine has a Graves-like minerality as well as loads of cassis and blackcurrant fruit, notes of tobacco, cedarwood, and earth, full-bodied richness, and an ethereal texture. It’s an awesome wine and possibly one of the greatest wines from this site. It’s already hard to resist given its texture and balance, but will keep for 2-3 decades. Bravo!–Jeb Dunnuck

Zeitgeist’s 2014 Cabernet Sauvignon The Grove emerges from Lewelling, one of the most historic sites in St. Helena. Rich, sumptuous and alluring to its core, the 2014 captures all the purity of this site. Even with all of its intensity, the Grove has a level of detail and translucency that is remarkable. Dark cherry, mocha, leather and licorice all flesh out effortlessly. — Antonio Galloni March 2018

There’s 400 cases of the 2015 Cabernet Sauvignon and it’s a blend of 95% Cabernet Sauvignon and 5% Petit Verdot, from the Farella, Lewelling, and Sleeping Lady Vineyard, that was brought up in 70% new French oak. It’s another concentrated, ripe, sexy 2015 that has classic notes of cassis, blackberry jam, crushed rocks and leather. With terrific balance and building tannin, it’s a classic Napa Valley Cabernet Sauvignon that will benefit from 3-4 years of bottle age and keep for 15-20 years.  –Jeb Dunnuck

The 2014 Cabernet Sauvignon Napa is 100% Cabernet Sauvignon from four separate AVAs: Coombsville, St. Helena, Yountville and Oakville. There is plenty of crème de cassis fruit, an inky purple color, notes of charcoal, toast, blackcurrants, and spicy oak are present in this dense, full-bodied opulently concentrated wine. It is multi-layered, impressive and has the silky suppleness of the 2014 vintage as a hallmark. Drink it over the next 15-20+ years.  —Robert M. Parker, Jr.

The 2013 Cabernet Sauvignon Sleeping Lady is a small cuvée but certainly the best of the four Cabs. Deep purple in color, with flowery notes intermixed with blackcurrant and blackberry liqueur, some forest floor and graphite, it is full-bodied, opulent and best drunk over the next 12-15+ years. —Robert M. Parker, Jr.

From old vines within the Fanucchi Wood Road Vineyard in the heart of the appellation, this is a rare bottling of a variety more commonly found in the Jura, but acquiring new fans in California, especially made at this high level. Creamy and round, it remains fresh on the palate in a lemon-swirled minerality that provides a savory edge of ginger. More…

Mark Porembski and Jennifer Williams make this wine from the Fanucchi Wood Road Vineyard in Fulton, from vines Peter Fanucchi planted in 1981. It’s an old-fashioned white. the sort that speaks of its terroir in scents of the local flora—in this case, mustard flowers, peaches and pears. Those flavors come in a modern package, soft, cushioned and clean. Try it with chorizo-stuffed squid. (350 cases) Zeitgeist Cellars, St. Helena, CA

Mark Porembski and Jennifer Williams blend this wine from two vineyards, Anomaly in St. Helena and Farella in Coombsville. The warm and the cool ends of the valley combine in a clean, supple 2010, balancing blue fruit and brushy manzanita spice with fat, round tannins. It’s a little heady in alcohol, but that’s integrated to read as richness. A sleek Napa Valley cabernet to match lean, grass-fed beef. (296 cases) Zeitgeist Cellars, St. Helena, CA

A blend from two vineyards, one in St. Helena, one in Coombsville, this is made by husband-and-wife team Mark Porembski and Jennifer Williams. The wine has a long drive of flavor, with cool red fruit darkening to black cherry. It feels elegant up until the end, the point where the warm St. Helena tannins haven’t yet integrated with the cooler tones of Coombsville. Give it time in bottle and more clarity of flavor should emerge in the finish.  Zeitgeist Cellars, St. Helena, CA

An impressive number of married couples also seem to enjoy making wine together…Add to that list Jennifer Williams, winemaker of Spottswoode (where I worked the harvest and wrote about it) and her husband Mark Poremski, winemaker at Anomoly and Charnu. Together they make Zeitgeist Cellars Cabernet Sauvignon. More…

…St. Helena resident Mark Porembski makes wines for Anomaly Vineyards and for Charnu Winery, both Napa Valley Vintner members. His wife, Jennifer Williams, is the winemaker and vineyard manager for Spottswoode Estate Vineyard & Winery. Porembski was first assistant winemaker at Behrens & Hitchcock/Erna Schein Winery on Spring Mountain in St. Helena and joined Anomaly in 2002. Three years later, in 2005, he became winemaker. Jennifer Williams has worked in Napa and the Central Coast and has completed an internship in northern Spain. She said, “The majority of my education and experience in the industry has had a vineyard focus. It’s been the grace of a handful of wonderful winemaker mentors who have taught me the ropes, and from whom I continue to learn.” One of those, obviously, was Rosemary Cakebread, who made wine at Spottswoode for nearly 10 years. Porembski and Williams have their own cabernet and syrah label, Zeitgeist Cellars. They reside in St. Helena with their young daughter, Kiran. More…

Another remarkable wine from this estate is the 2016 Cabernet Sauvignon The Grove, which comes all from the Lewelling Vineyard on the west side of St. Helena. From 20- to 25-year-old vines and aged 22 months in barrel, it reveals a deep purple color as well as a complex, nuanced style (which is the hallmark of this vineyard) in its blue fruits, lavender, violets, and incense. Deep, full-bodied, and incredibly sexy and voluptuous on the palate, this thrilling 2016 can be drunk today or cellared for 15-20 years or more.    January 31, 2019   www.jebdunnuck.com

The 2016 Cabernet Sauvignon Sleeping Lady Vineyard is a blend of 98% Cabernet Sauvignon and 2% Cabernet Franc. It has a deep purple-black color and wonderfully floral notes of potpourri and violets over a core of crushed blackberries and black cherries, with nuances of spearmint and black tea plus a waft of unsmoked cigars. The palate is full, rich, concentrated and super firm with wonderfully ripe, grainy tannins, packing in the earthy layers and finishing long. 126 cases produced, to be released in the fall of 2019.  October 29th, 2018 Lisa Perotti-Brown  www.robertparker.com

Checking in as a blend of 92% Cabernet Sauvignon and 8% Cabernet Franc from a number of top vineyards in the valley, the 2016 Cabernet Sauvignon Napa Valley spent 22 months in oak prior to bottling. In the running for one of the top Cabernets for under 100 dollars, this beauty has fabulous purity and elegance as well as a complex style in its sweet black fruits, licorice, spice, and subtle oak. Sort, forward, and ready to go, it should nevertheless cruise for 10-15 years in cold cellars.

The 2016 Cabernet Sauvignon is a blend of 92% Cabernet Sauvignon and 8% Cabernet Franc from the Sleeping Lady vineyard (Yountville), Oakville Station vineyard (Oakville), Lewelling vineyard (St. Helena) and Farella vineyard (Coombsville). Deep garnet-purple, it opens with expressive red and black cherries, wild blueberries and lavender with hints of chocolate box and menthol. The palate is full, rich, concentrated, firm and plush with loads of fruit and floral layers, finishing long. 396 cases produced, to be released in the spring of 2019.

The 2016 Cabernet Sauvignon (Napa Valley) is fabulous. Then again, that should not be entirely surprising given that Zeitgeist pulls fruit from Sleeping Lady, Farella and Lewelling for this bottling. Dark, powerful and ample, the 2016 speaks with the voice of distinction. Black cherry, smoke, licorice, scorched earth and leather add to an impression of gravitas. This is an especially dense, potent wine in its peer group. Give it another year or two in bottle.

The pick of the litter, however, remains the 2014 Cabernet Sauvignon Sleeping Lady Vineyard, which is 100% Cabernet Sauvignon from Yountville. Terrific mid-palate sucrosity, an inky purple color, spectacular blueberry and blackberry fruit, crushed rock, spring flowers and unsmoked cigar tobacco are all present in this deep, rich, full-bodied wine that should drink well for 20-some years at the minimum. —Robert M. Parker, Jr.

There are 421 cases of the 2013 Cabernet Sauvignon Napa from the same four sites used for the 2012. This wine is coiled tightly and displays higher tannin as well as higher extract and richness. It has an inky purple color and beautiful, dense blackberry and cassis flavors along with hints of licorice, forest floor and earth. Some background oak also makes an appearance. This wine will benefit from several years of bottle age and should drink well for 15 more years. —Robert M. Parker, Jr.

Very pale color. Fresh herbs, white pepper, smoke and spices on the nose; reminded me a bit of gruner veltliner. Tactile, saline and bracing in the mouth, with very dry but not overly herbal flavors of lemon zest, anise, white pepper and snap pea. Dusty and concentrated but not hard. Saturates the palate with lemon, pepper and spices on the lingering finish. Leaves the mouth feeling refreshed. I like this style. — Stephen Tanzer May 2014 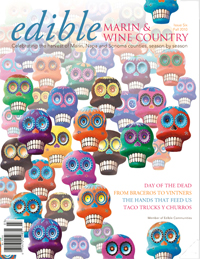 Zeitgeist is a philosophical term meaning the spirit of the times. Zeitgeist Cellars was conceived and is operated by Mark Porembski and Jennifer Williams. Mark’s day jobs are as assistant winemaker at Behrens Family Winery and winemaker at Anomaly Vineyard in St. Helena. Jennifer’s day job is that of winemaker at Spottswoode Estate Winery in St. Helena. Mark’s path to California took him through Boston’s North End where he was drawn to wine via the relaxed underage drinking policies of the waiters in some of his favorite eateries. He moved to California in 2000 holding tightly in his hand that which all good winemakers strive for: a degree in poetry. The bard has found his vehicle. Jennifer has a degree in agriculture from Cal Poly and paid her dues at a number of wineries in California as well as in Rioja Alavesa in Spain before accepting the winemaking position at Spottswoode in 2006. The Zeitgeist Syrah hails from a dry-farmed vineyard located at the top of Mt. Veeder, which straddles the Napa/Sonoma county line. The rows that they have contracted lie within the Napa Valley appellation. Comprised of 100% Syrah, the nose belies its origin. One sniff and you are vaulted into the Rhone. Perhaps Cornas or Hermitage. Meaty and brooding, the wine has a very intense nose that screams SYRAH. The flavors that follow are true to what is promised in the nose, but with an unexpected smoothness that belies the intensity. 47 cases produced

Rich with lots of juicy fruit here. Full with a round and soft tannin texture and fresh acidity. Lacks a little bit of fruit at the finish. But it should come together with bottle age. Best after 2013.

Item(s) have been added to your cart.